AMC CEO says lack of new movies, not COVID or streaming, is the real threat to theaters

AMC Theaters CEO Adam Aron has consistently expressed optimism about the future of his theater chain and has continued to do so in a earnings call Tuesday during which he took issue with what he called “conventional wisdom” in the media about perceived threats to his industry.

Aron played down the effects that COVID-19, the popularity of streaming and the shrinking theatrical window have had on cinemas as they weathered a box office feast or famine year. Conversely, Aron said insufficient attention had been given to the lower number of films in 2022, which he said was the real threat to cinemas as they tried to dig out the financial hole left by the closures. pandemics of 2020.

“People will still come down with COVID-19, but it’s no longer the business-destroying thing it was in 2020 and 2021,” Aron asserted, pointing to the increased availability and use of the COVID-19 vaccine. and the subsequent drop in hospitalizations as evidence of the return to normal, at least in terms of customer confidence in the safety of going to the movies.


Regarding streaming, Aron reiterated arguments made by other theater CEOs like the head of Cinemark Sean Gamble stating that movie theaters and streaming services can co-exist, touting AMC’s first-ever recent deal with Netflix to screen “Glass Onion: A Knives Out Mystery” for a limited one-week engagement later this month . AMC also hosted special screenings of the Paramount+ series “Yellowstone” starring Kevin Costner in its theaters in October.

Aron also echoed Gamble’s argument that a 45-day theatrical release window — half of what exhibitors fought for tooth and nail before the pandemic — is still good for theaters and streaming services. giving theaters enough time to sell tickets for the movie while getting those titles to release faster, while taking advantage of the increased exposure of those movies to audiences that comes with a theatrical release.

“I hope it proves acceptable to theaters and studios,” he said. “At this point, there’s only one topic that should be on everyone’s mind…theatrical exhibitors need more movies.” 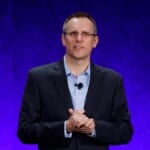 For months, major figures in the exhibition industry like NATO chief John Fithian have warned that production delays caused by the pandemic have drastically reduced the number of films released by studios in the theaters in 2022. While movies like “Top Gun: Maverick” also played like any pre-pandemic blockbuster, the theatrical slate has seen months-long stretches where theaters went without the wildly popular tentpole genre who support the cinema.

This led to significant declines in January and February and later in August and September, where combined domestic revenue in those two months fell from $1.51 billion in 2019 to just $790 million in 2022. This slump extended into October, which saw a total monthly gross of $468 million, the lowest since 2001, when the September 11 attacks drastically reduced interest in films.

“Every few months I have the opportunity to meet in person with the heads of major Hollywood studios,” Aron told investors. “Time and time again I hear from them that they are doing everything in their power to pick up the pace of the number of movies they release in the future.”

Signs point to 2023 having a lot more movies on the slate than 2022, including four DC movies, three Marvel Studios movies, new installments in ‘Fast & Furious’, ‘Mission: Impossible’, ‘Transformers’, ‘Hunger Games” and “John Wick” franchises, as well as Harrison Ford’s fifth and final turn as Indiana Jones, to name a few.