Movie theaters began popping up in Michigan over a century ago, becoming the heart of downtown communities and attracting families for a night on the town.

Then, in the 1980s, with the introduction of cable television, laserdiscs, VHS and DVDs for home viewing, as well as multiplex facilities, many small town theaters began to close.

In recent years, however, there has been a resurgence in the restoration of these historic movie theaters into different types of public spaces like bars, restaurants, dance studios, and even a popular haunted attraction.

Downtown Marquette has two historic theaters, located directly across from each other.

The 650-seat, single-screen Delft Theater opened in 1914 on West Washington Street and was eventually one of five operating in the Upper Peninsula by Wisconsin-based Delft Theaters Inc. (the others being in Crystal Falls, Escanaba, Iron River and Munising). The Marquette location was remodeled in the 1940s and eventually expanded into a five-screen theater before closing in 2012. 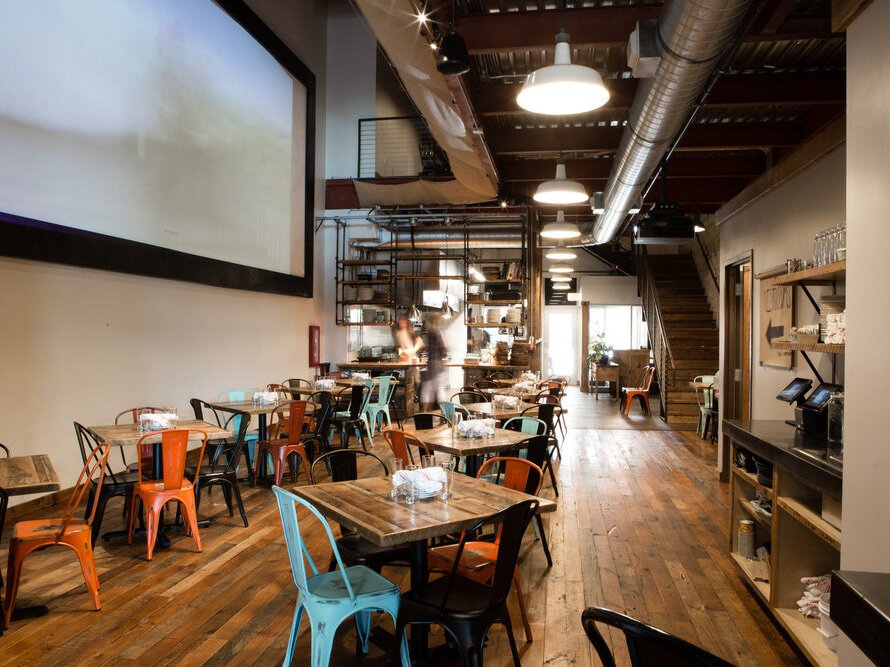 The interior of the old Delft theatre, now Delft Bistro.
Today, Delft Bistro serves American fare and locally sourced craft beverages, while featuring nightly featured movies in the main dining room. According to an article by SecondWaveMedia.comfunding for the project came in part from a community development block grant from the Michigan Economic Development Corporation (MEDC) of approximately $480,000 in 2014.

Movies were apparently a hot ticket at Marquette—in June 1935, ground was broken on a companion theater across West Washington Street. Designed by famed New York architect Michael Meredith Hare (who helped design Rockefeller Center and Radio City Music Hall), the Nordic Theater opened on April 11, 1936, and operated until 1994. For many years, Book World occupied the modified space until its closure in 2018. 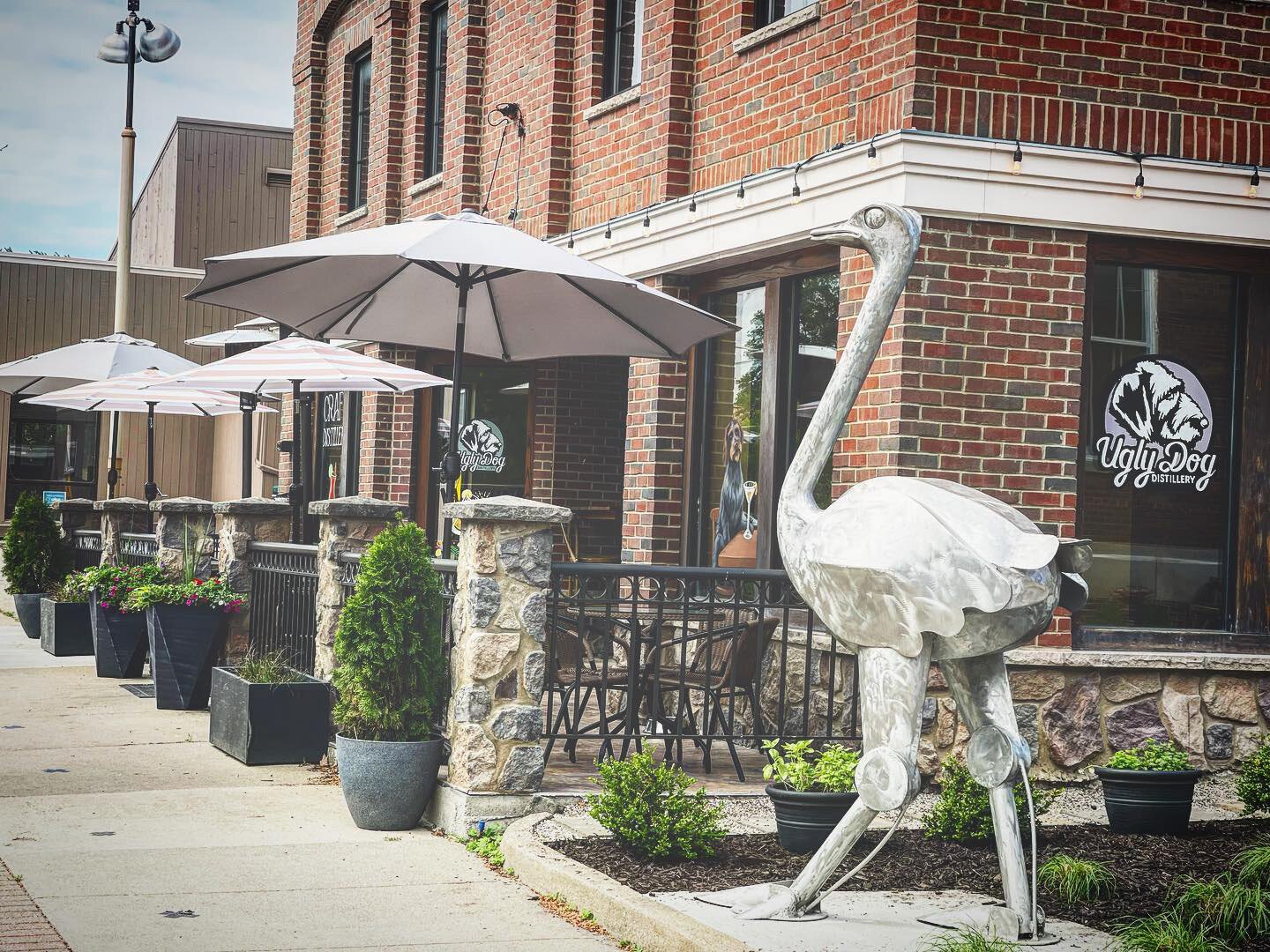 The old Sylvan Theater now houses the Ugly Dog Distillery.The Sylvan Theater was a 450-seat which opened in 1939 on South Main Street in Chelsea (opposite the 245-seat 1914 Princess Theater located at street level from what is now Merkel’s Furniture Store). While the Princess closed in late 1939, the Sylvan operated until 1967. United Auto Workers Local 437 purchased the building the following year, removing the seats and leveling the floor . Since 2018, the winner Ugly Dog Distillery called the space home.

Downtown Ann Arbor is home to two historic theaters— Michigan and the State. Designed by famed architect C. Howard Crane, the single-screen Art Deco-style State opened in 1942 on South State Street and was transformed into a four-screen multiplex in 1977. A decade later, the level main was converted into a Borders Bookstore while the second floor balcony was eventually closed off until 1992 when it became a two-screen second-run theater.

Just before the turn of the century, the nonprofit Michigan Theater Foundation was hired to manage the state’s programming, purchasing the building in 2014 and renovating it into a state-of-the-art four-screen movie theater in 2017. The upper floor houses a Target store since September 2021 (after briefly serving as Urban Outfitters).

One of C. Howard Crane’s proteges was Percival R. Pereira, who opened the 2,950-seat oriental theater in Detroit’s Grand Circus Park on September 26, 1927. It was the city’s only atmospheric style theater – a concept “designed and decorated to evoke the feeling of a special time and place for patrons, thanks to the use of spotlights, architectural elements and ornaments”. which evoked a feeling of being outdoors. This was intended to make the patron a more active participant in the framework,” according to Wikipedia.

The Middle Eastern-style theater was purchased and renamed RKO Downtown Theatre, operating for two decades before being razed for parking in 1953. Only the theater lobby survived, which now operated as PAO Detroit, an Asian fusion restaurant, since summer 2019. The open-concept design showcases the original theater wall, an opulent mezzanine overlooking the park, and an expansive outdoor terrace. PAO’s architectural flair was designed by Think Shop Architects and is one of three area restaurants operated by Prime Concepts Detroit (with a new Italian concept coming in 2023 at West Bloomfield).

The community of Clawson in Oakland County was incorporated in 1940 and a year later was home to popular hangouts, the Ambassador Roller Rink and the Clawson Movie Theater, both located on West 14 Mile Road. The theater closed in 1961, while the rink lasted until 2005. The following year, Mary Liz Curtin and her husband, Stephen Scannell, took over the 15,000 square foot rink building and the have transformed into Leon and Lulu—a furniture and design store (retaining the original hardwood floor, 30 pairs of skates, disco ball, hockey scoreboard and other items). 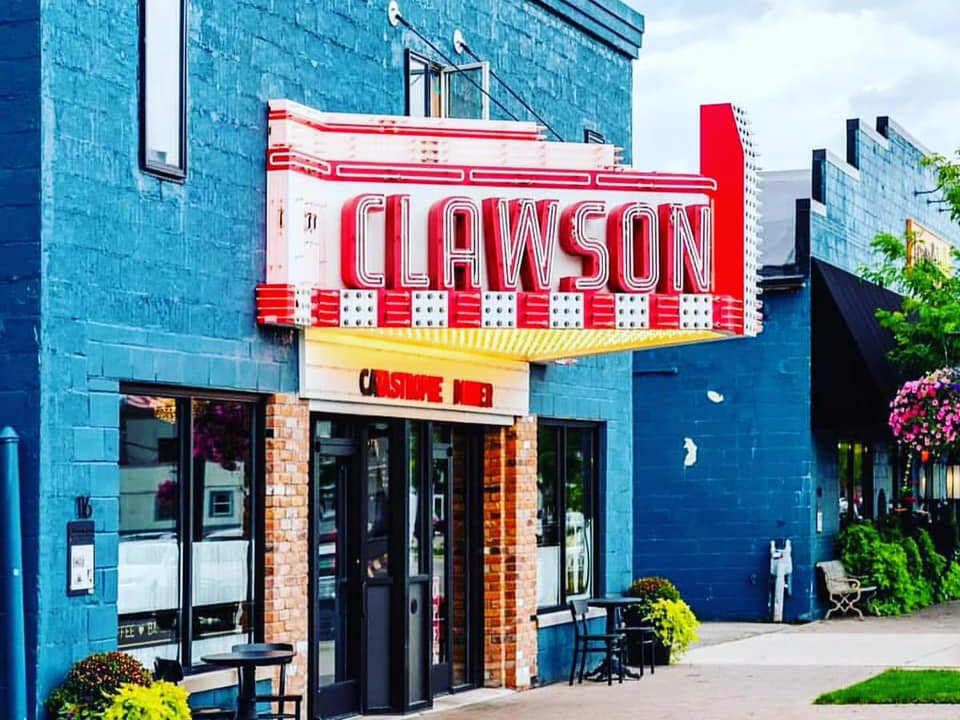 The Clawson Cinema is now a cafe called Three Cats.
For a time, the theater space was used as an annex of Leon & Lulu, but in 2019 Liz teamed up with longtime Michigan restaurateur Patt Printice to open up the fun and eclectic space. three cats restaurant. The menu is extensive, with several vegan and vegetarian offerings, as well as an impressive wine list and a selection of all Michigan craft beers and spirits.

Herb Weil at one time owned all five operating movie theaters in Port Huron, having broken into the business in 1917. He opened the 1,350-seat Desmond Theater on July 26, 1922 at 1006 Military St. in the center -city for a cost of $150,000 according to CinemaTreasures.org. It was later renovated into the Art Deco-style Huron Theater before being purchased by GKC Theaters and ceasing operations in 1990. Since 1993, the building has housed the Huron Physical Arts Centeroffering dance and gymnastics competitions.

In the heart of downtown Mackinac Island is The haunted theater, an old-fashioned spooky site that hosts thousands of people every season. The building was originally constructed in 1885 by Charles Caskey – two years before he completed one of his most notable projects: the Grand Hotel. He is said to have built over 1,000 “cottages” on the island and around Petoskey and Harbor Springs during this time. Originally used as a skating rink and dance hall, the space was transformed into a family theater with “moving pictures” in 1907 and became a movie theater called Orpheum Theater. Community leaders Frank Nephew and Robert Benser helped bring the Haunted Theater to life in 1974.

Dianna Stampfler has been writing professionally since high school. She is the president of Promote Michigan and the author of Michigan’s Haunted Lighthouses and Death & Lighthouses on the Great Lakes, both published by The History Press.

The best of modern Romanian cinema is now showing in Arizona

Wakanda Forever is now in theaters in the United Arab Emirates: Here’s what critics are saying about the film – News

Now on view, ‘See how they run’ | Comments